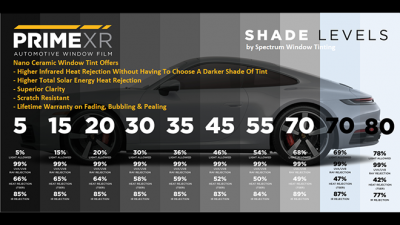 Hybrid Window Tint Film
Hybrid tinting film aims to combine the best features of dyed window film and metalized window film, leaving all of the drawbacks behind, and is a budget friendly film. The layer of dye will help give it the dark look that the dye film can provide and the metalized layer will still offer some, though not all, of the UV protection of a standard metalized film. It will be more durable than dyed window film, but less metal is used in its manufacturing, so it will not cause as many interference issues with your electronics as a standard metalized film would. Reducing interference and cost while achieving a nice, dark appearance and UV protection seems to be the best of all worlds.  Hybrid Window Tint Films will match the OEM window dye for those vehicles that come with pre-dyed back windows.  Our hybrid window tint film comes with a lifetime warranty on fading, bubbling and peeling.

Dyed Window Tint Film
Dyed window film is the old school window film of the past. It was the very first type of window tint manufactured.  It is a three-ply film, with a layer of dye sandwiched between a layer of adhesive and a protective layer on the outer surface. It is the most popular type of window tint because it is the least expensive for the customer, as well as the installer. This film is used the most by beginner and mobile window tinters because of the low inventory cost. It is also the least durable and will fade to a bronze color over time. Dyed window film does not deflect heat from entering the car because the material is not reflective, so your car’s interior will still get quite hot. We can compare dyed window tint to wearing a black shirt outside. The dark, flat color of dyed window tint film will attract heat and make the interior of the car hotter. Dyed window tint film is more for privacy and UVA/UVB protection, but does very little for heat rejection.  One big advantage of dyed window film is that it is devoid of any metallic substances, so it won’t interfere with your car’s electronics systems, such as GPS, tire pressure monitors, antennas and phones.

Metalized Window Tint Film
Metalized window film is another popular choice, but many people find the drawbacks to outweigh the benefits. It consists of an adhesive layer and a protective outer layer with a UV-protective layer and a metalized layer in between. The UV layer helps this type of window tint offer important protection from UV rays, which are harmful to both you and your car’s interior. Metalized window tints are also much more effective at keeping your car’s cabin cool than dyed films. Unfortunately, the metalized layer can wreak serious havoc within your car’s electronic communication systems. This film will likely interfere with your radio if your antenna isn’t externally mounted on your vehicle and it could cause problems with your cell phone’s reception, your GPS signal and even your tire pressure sensors. Metalized film will fade to clear over time. The final consideration is how it will look on your vehicle. Since the metalized material is reflective, it is also shiny and most states (like Texas) have outlawed metalized window films. Integrity Window Tinting does not offer metalized window films.

Carbon Window Tint Film
Carbon window films also fall squarely in the middle of your options in terms of advantages and disadvantages. Carbon film has no metal, so interference will not be an issue. It will also block UV rays and heat effectively, so it will help you reduce the stress on your car’s HVAC system. Carbon film is not as popular as the other options, probably because while it does everything well, it is not the clearest of films and can distort over time. The heat rejection on carbon films depends on the darkness of the film; therefore, to achieve a higher heat rejection, you must go darker.  However, carbon window tint film is a budget friendly film.

Darkness or Shade of Window Tint Films
Now that you have decided on the quality of window tint film, you can now move on to the shade of window tint film.  Window tint films are classified by the amount of light they allow in by percentage. The lower the percent number, the darker the film and the less light is let in.  The higher the percent number, the lighter the film and the more light is let in. The legal limit for the two front doors in Texas is 25%. Your vehicle’s two front doors from the manufacturer is typically already at a 70% shade; therefore, window tint shops put a 30% or 35% film on the two front doors to make it the legal limit of 25% to 26%. The back half and rear windows can be any darkness in Texas.  We carry all the different shades of tint from clear 70% windshield tint to 5% limo tint. You can decide the shade of window tint when you are in the shop.  The shade of window tint will not affect the cost of the window tint installation. A 5% tint, also called limo tint, is the darkest film we carry. Factory tints, also called dyed privacy glass, on rear windows tend to be in the 20% range. Keep in mind that the factory dyed privacy glass does not offer any heat rejection and will actually make the car hotter by absorbing heat, like wearing a black shirt outside. The legal limit for your windshield in Texas is 70% which is considered clear.

Color Window Tint Film
Car window tint generally comes in three different colors: blue black, black and charcoal (amber). Blue black is typically a ceramic film and offers the very best clarity and lasts the longest. Black comes in ceramic, hybrid and metalized window films. Black is simply a pure black in color which transitions to gray as the shade of film gets lighter.  While charcoal (amber) is typically dyed and carbon films.

State laws regarding window tint are quite clear and law enforcement officers do not always have a sense of humor about illegal tint. Know the laws governing car modifications in your area. If you are going to exceed the legal darkness level, know the potential consequences of your decisions.

Thickness of Window Tint Film Explained
Window tint films of all varieties come in 1- and 2-ply thicknesses. A ply is typically 1 mil (1/1000th of an inch), so 2-ply films are about 2 mil. Thickness can imply quality and durability, but it is not always necessarily true. A manufacturer could add a second ply to a cheap product, but the resulting window film would not magically be higher quality. Trust product reviews and recommendations from experienced installers to make a decision on quality.